The Genius Under the Table 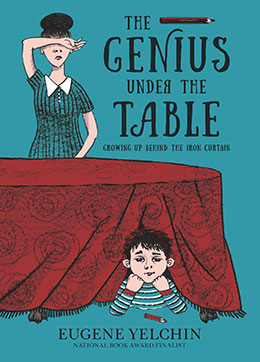 Mikhail Baryshnikov, one of my longtime crushes, was on CBS Sunday Morning talking about his organization True Russia, which grew out of his concern for the land of his childhood, Latvia. Putin’s attack on Ukraine has raised threat levels to critical in countries that all too recently gained their independence from the former Soviet Union.

Thanks to The Genius Under the Table, Eugene Yeltsin’s memoir, I felt informed enough to understand what Mr. Baryshnikov was talking about … and he’s in Mr. Yelchin’s book!

Eugene Yelchin grew up in Stalinist Russia, the Cold War Soviet Union. We grow to love his parents, his grandmother, his brother Victor, but most especially Eugene. His memories are at once sad and humorous.

Growing up in a one-room apartment in St. Petersburg, his mother worked for the Vaganova Ballet School. His father is a strict Communist who loves poetry. His grandmother is a card.

Eugene’s mother was determined he would grow up to dance her beloved ballet. Eugene didn’t share her enthusiasm. His brother Victor is training and competing in international skating. Eugene admires his brother but Eugene’s talent, his passion, is drawing. He hides this from his parents, drawing at night with his father’s pencil on the underside of the dining room table, the canopy over his bed.

This is a page-turner. Children and adult readers will need to know what happens next. And the humorous tone of much of the book will keep them riveted. I was left with a stronger sense of what life was like in that era, in that country, in that restrictive political environment. I’m hoping Mr. Yeltsin will continue his childhood story with another installment. I’m pre-ordering it now. I, too, am worried about the countries surrounding Russia.

Mr. Yelchin did a video interview with Mackin about this book.

2 thoughts on “The Genius Under the Table”

Hero for the Hungry

The Genius Under the Table

Out of My Heart