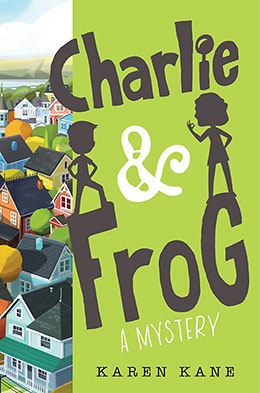 Charlie Tickler’s do-gooder parents are off to South Africa to save giant golden moles. He’s never taken along on their crusades. This time, they’ve driven him to stay with his grandparents in upper New York. His grandparents watch TV all day long, fans of reality shows, and they don’t pay any more attention to him than his parents do.

Bored and frustrated, Charlie wanders through town. When an elderly woman gives Charlie a message in American Sign Language, he doesn’t know what to make of it. He doesn’t know ASL. But he’s worried about what the woman was trying to tell him. He senses her desperation. And she has disappeared.

The town of Castle-on-the-Hudson, where his grandparents live, is home to a school for the deaf. It is not unusual to meet people who know ASL or who are deaf. In fact, one of the first people Charlie meets when he sets out on his walk around town is a young girl who is deaf, working at the Flying Hands Café. She knows ASL. Her ambition is to be a great detective. Francine Castle—known as Frog—joins with Charlie to solve the mystery. She believes it’s a murder mystery. Charlie is doubtful.

Along the way, Charlie comes to love Frog’s family and doesn’t want to leave Castle-on-the-Hudson when his parents return from their mission. He decides to change his grandparents, distract them from watching TV, so they’ll invite him to live with them. And Charlie and Frog delve into the mystery, eventually bringing a long-hidden secret into the open.

Light-hearted, dealing with serious subjects, written with a deft touch with suspense and plotting, this is a middle grade page-turner with big feelings. Charlie and Frog become our friends, so it’s a good thing that there’s a second book, Charlie & Frog: The Boney Hand.