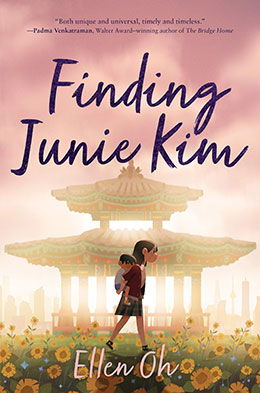 My father enlisted in the Navy at the age of 16 to fight in the Korean War. He was seriously ill before he could ship out, and so he became a supply clerk stateside. In May of 1953, he was discharged. The Korean War armistice took place in July. My parents were married on September 5th of that year and my father died on October 11th. He was 21. I didn’t lose him to the War, as so many did. I’ve watched M*A*S*H, wondering what life was like for soldiers in that war, wondering if my father’s life would have been different, who he would have been having fought in a war.

Ellen Oh’s story is firmly rooted in the present-day United States where Junie Kim is waging her own battle against middle school bullies and racism and depression. She doesn’t know how to fight back and so she isolates herself from her friends. Her parents encourage her to see a therapist. But it’s her history teacher who provides the key that opens a door for Junie. An assignment to interview her grandparents bring stories to light that Junie has never heard. Stories of her grandparents’ life in Korea … during the Korean War. For this reader, the viewpoint of South Korean residents is welcome, valuable, mind-widening.

The author unfolds the story in a way that young readers will find mesmerizing, imagining her characters in real life, turning the page again and again to learn what will happen next, both in mid-century Korea and in the United States today. You’ll be rooting for Junie Kim and her family all the way. I highly recommend this book for ages 10 through adult. I am so glad it was chosen as an Asian/Pacific American Award for Literature Honor Book in 2022.