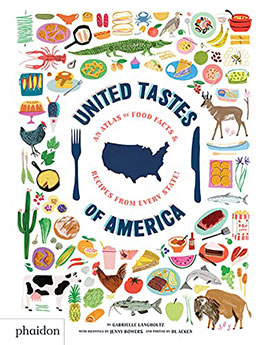 The cookbook shelves at our house are stuffed with books we treasure. Steve and I both started our cookbook habit as children. They’re enlightening and mouth-wateringly fun to read!

We were recently gifted this book and I recommend you gift it to the young people in your lives who show an interest in cooking, the Food Network, and junior competition shows.

The format is four pages for each state in a folio-sized book. The first two pages are written to give a background of what distinguishes the state and to share morsels of the state’s food likes and facts. Diversity is represented.

For instance, in Alaska’s pages, I learned about nagoonberries, with a taste between a raspberry and strawberry. In Arizona, I learned that residents have many different ways to prepare a myriad of cactus plants. In Iowa, “10,000 people take part in the Great Bicycle Ride Across Iowa. They take breaks to eat pie, like sour cream raisin pie with meringue topping.”

In Kansas, I learned that sliders, bite-sized burgers, originated in Wichita in the 1920s. The longer text describes how farmers plant, care for, and harvest wheat, and the traditions they observe such as threshing dinners and harvest picnics.

The two states I feel I know the most are Minnesota and Wisconsin, so when I read that the two favorite sandwiches in Minnesota are the porketta and the Juicy Lucy, I raised my eyebrows. I had never heard of a porketta. However, questioning my Minnesota team on Facebook, I quickly discovered it’s a specialty on the Iron Range of northern Minnesota. (One friend even supplied a recipe!)

The remaining two pages for each state feature a recipe that would commonly be made by cooks there. It’s a cookbook for teens so many of the recipes are basic to more experienced cooks, but I sense they will appeal to teen cooks. There’s a three-dot difficulty rating and the recipe layout is conducive to gathering ingredients. The recipes are clearly written, keeping the audience in mind. And the photos? The photographer has done a wonderful job of making each recipe look delectable.

You’ll have to look up your own state’s recipe, but Minnesota’s is a Wild Rice Hotdish, Ohio’s is Buckeye Candies, and Wisconsin’s is Macaroni and (wait for it) Cheese.  A sampling of other recipes include Tofu Poké Bowl, St. Louis Gooey Butter Cake, Quick-Pickled Cucumbers, Popcorn Balls, and Guacamole.

Overall, this is a fun and informative book whether you read cookbooks or use them to make food!

One Winter Up North

A Beginner’s Guide to Being Human

The Voice of My Heart

The Power of Architecture

Garvey in the Dark